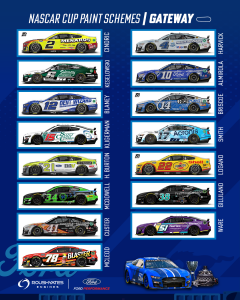 “Congratulations to Ford Performance, Roger, Paul, Joey, and everyone at Team Penske for the race win and team performance at Gateway,” said Doug Yates, President and CEO of Roush Yates Engines. “Paul and Joey did a great job, putting them up front at the end and executing the late race restart to bring home another inaugural race win this season at Gateway.”

“Thanks for coming out, guys,” Logano said, acknowledging the sellout crowd. “I hope you enjoyed that race. It doesn’t get much better than that. Racing for the lead like that with Kyle, one of the best. It was a lot of fun. Crossing each other back and forth. I knew it was coming. I did it to him; I knew he was going to do it to me. We crossed back and forth there a couple of times.”

Ford Performance teammates Chase Briscoe with Stewart-Haas Racing and Austin Cindric from Team Penske started on the front row for the Enjoy Illinois 300 while Ryan Blaney started P5, Joey Logano P7, Aric Almirola P8, and Harrison Burton P9, making a total of 6 Ford Performance Mustangs in the top 10. Chase Briscoe went on to lead the first 27 laps before unfortunately blowing a tire. On lap 27, Austin Cindric took the lead and went on to win Stage 1, securing 10 points and one additional playoff point. There were 10 caution periods in the race for a total of 53 laps. The closing laps of the race was a battle between Kyle Busch, Joey Logano, and teammate Ryan Blaney. A late race accident sent the race into overtime, and Joey Logano was able to secure the race win with a .665-second lead over second place.

NASCAR Cup returns next week with the Save Mart 350 at Sonoma Raceway while the Xfinity Series returns to action on June 25th at Nashville Superspeedway.