FORD IN THE NASCAR CUP SERIES AT AMS

FORD IN THE NASCAR XFINITY SERIES AT AMS

FORD IN THE GANDER RV & OUTDOORS TRUCK SERIES AT AMS

Brad Keselowski gave Mustang its first NASCAR Cup Series victory as he held off Martin Truex Jr. at the finish to win last year’s Folds of Honor 500 at Atlanta Motor Speedway.  Keselowski, who was battling an illness all weekend and had Austin Cindric standing by in case he needed relief, led the final 33 laps to post his 28th career victory.  In all, Ford led 177 of the 325 laps and won for the third straight year at the 1.5-mile track. 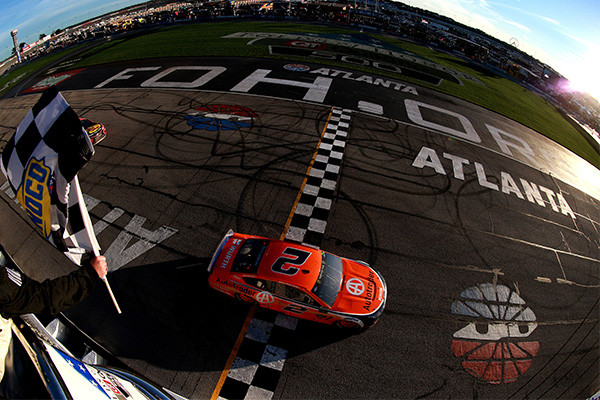 Kevin Harvick led eight times for a race-high 181 laps in winning the Fold’s of Honor 500 in 2018 and completing a sweep of the NASCAR Cup Series and NASCAR XFINITY races.  After winning all three stages the day before in his Ford Mustang, Harvick took the first stage in the Cup race and then led the final 25 laps to post his 38th career victory and third with Ford.  Brad Keselowski finished second and Clint Bowyer third to give Ford a 1-2-3 sweep.  Ford dominated from start to finish as four drivers combined to lead 272-of-325 laps.  Harvick became the first Ford driver to sweep a Cup/XFINITY weekend since Joey Logano did it in 2015 at Watkins Glen International. 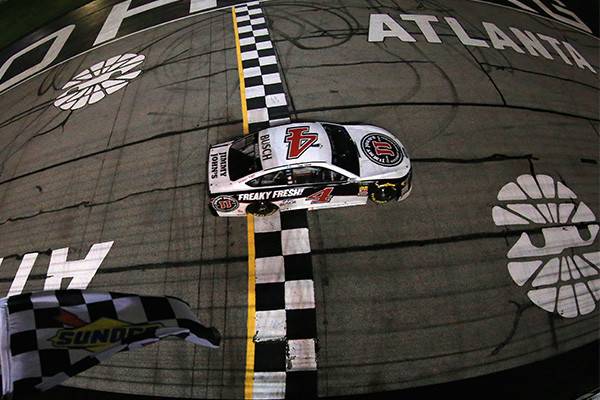 Brad Keselowski took advantage of a pit road speeding penalty by Kevin Harvick to pull away from the field in the final 14 laps to win the Folds of Honor 400 in 2017 and snap a 10-race Ford Performance draught in the NASCAR Cup Series.  The win was Keselowski’s first at AMS, but it didn’t look likely because Harvick dominated the afternoon, winning the first two stages in convincing fashion.  He appeared headed to victory, but on his final stop he was hit with a speeding penalty on pit road and didn’t have enough time to recover.  That proved to be a major storyline on the day as NASCAR handed out a total of 11 speeding penalties.

EDWARDS DOES BACKFLIP FOR THIRD TIME

When Carl Edwards beat Jimmie Johnson to the finish line by 2.684 seconds in 2008, it marked his third at the track and first since sweeping both events in 2005.  In addition, it moved Edwards up two spots into second-place in the point standings, but he was still a distant 183 points behind Johnson with only three races to go.  Edwards eventually finished runner-up in the Chase that season by 69 points.

Morgan Shepherd capturing Ford’s 400th series victory in 1993 when snow delayed the Motorcraft Quality Parts 500 for nearly a week.  The original race date was Sunday, March 14, 1992, but a blizzard that would eventually be called the ‘Storm of the Century’ pounded the Atlanta area with 6-8 inches of snow.  An estimated 82,000 fans came back the following Saturday, where they were greeted by souvenir rigs that sports t-shirts proclaiming ‘I Survived the Atlanta Blizzard 500.’  When the race started Mark Martin had the dominant car as he led 140 of the first 225 laps, but engine problems put him out of the running and Shepherd took advantage as he stretched his fuel mileage to the finish, leading the final 12 laps and winning by a whopping 23.50 seconds.  The win for Shepherd, who was 51 at the time, was his fourth and final victory in the NASCAR Cup Series.

Marvin Panch was the first driver to sweep both AMS races in a single season when he did it in 1965 with the Wood Brothers.  Georgia native Bill Elliott posted a pair of season sweeps (1985 and 1992) and won five times overall while Carl Edwards registered the first win of his career at the speedway in 2005 and matched it later that fall.

Ford went to victory lane at Atlanta Motor Speedway for the first time in 1961 when NASCAR Hall of Famer Fred Lorenzen captured the Festival 250 on July 9 while driving for Holman-Moody.  He did it in dominating fashion as well by lapping the field.  Lorenzen, who led 52 laps on the day, beat runner-up Bob Welborn by one lap in his 1961 Ford.  Richard Petty finished third that afternoon, but was three laps down.  That victory served as a springboard for Lorenzen’s future success at AMS, which included becoming the first driver to win the Atlanta 500 three straight years (1962-63-64).