THE FORD MODEL T to GT, LOGANO HAS IT COVERED 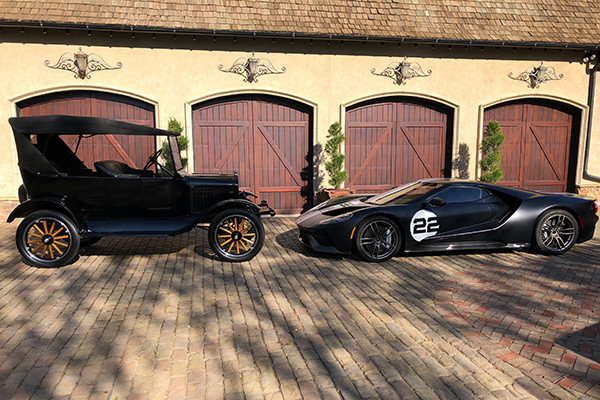 Those words from Henry Ford came in 1909 shortly after he decided the Ford Motor Company would only make the Model T, which was produced from 1908-1927 and became the most popular vehicle of the time with more than 15 million units sold. 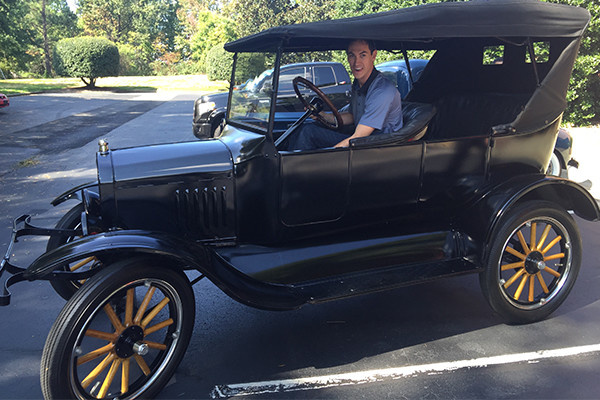 Nobody can know for sure if Joey Logano and Mr. Ford would have agreed on every issue that faced the company during its formative years, but they would have definitely been on the same page with that specific statement.

All one needs to do is look at some of the cars Logano has accumulated in recent years to realize he has a love affair with the color.

“Everything I own is black.  I like black,” said Logano, who counts a 1924 Model T and 2017 Ford GT among the personal favorites in his growing collection.  “I guess I fell in love when I bought the Ford GT with the heritage scheme on it, the matte black exterior, silver stripe and the number on the door.  I kind of fell in love with that.”

He even went so far as to put the two Ford icons nose-to-nose in his driveway a couple of weeks ago as a way of showing to himself that the more things change, the more they stay the same.

“Driving them is obviously different, and so is the way they’re built with the technology and the geometry of looking at it, but you still have four tires and there’s still air in those tires,” reasoned Logano, who counts the F-350 Tremor as his preferred daily driver.  “Yeah, your suspension pieces are all different, but it still has a steering wheel, it’s still got a motor.  There’s just a lot of similarities that are still being used today even though the cars couldn’t be more different.”

To illustrate that point, he took wife Brittany and two-year-old son Hudson for a drive through their neighborhood, starting first with what Hudson calls the “T-ride”.

“We drive the Model T around like it’s a golf cart.  It puts a smile on everyone’s face and we love it,” said Logano, who gave the Godfather of Ford Performance, Edsel B. Ford II, a ride in it through the streets of Concord, NC, a few years ago.   “And then after that I was cleaning my GT and I was like, ‘I’ll take this around the neighborhood real quick’ and it was like, ‘Whoa.  Different worlds.’  But it was fun and it’s cool. 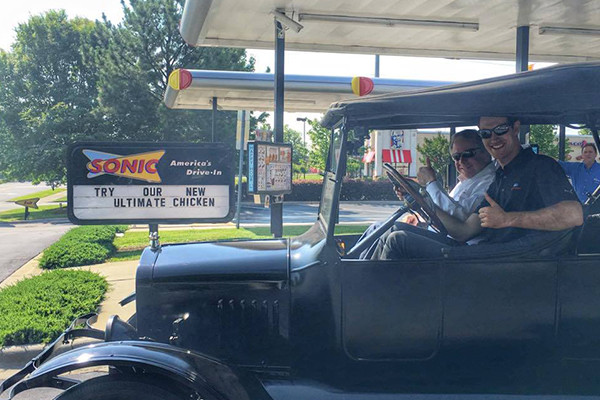 “People look at you funny when you’re trying to crank start your Model T.  You get some funny looks, but it’s fun for me,” continued Logano.  “I think the reason why I love it so much is that it’s challenging to drive.  If you drive a race car every day, driving a street car is really, really simple and boring – like really boring.  If you drive a GT around, it’s just tempting you to go to jail.  I still want a challenge, but I don’t want to go to jail, which makes the Model T the best car I have.”

It may be the best one, but it’s far from the only one.

For instance, he owns a 1961 Ford Econoline truck that he bought from a security guard at Charlotte Motor Speedway.  He restored it by lowering the height, painting the outside matte white and then trimming the dash, steering wheel and tires out in lime green.  The final touch was installing lime green shag carpet in the truck’s bed.

“I went camping with Hudson in our backyard the other night because I put a pop-up camper that’s all screened in on the back of it,” said Logano, who has two wins in four starts in the NASCAR Cup Series this season.  “We had a little TV and watched the Little Rascals in there, and we camped out at least until 11:40. That’s as far as we got, but it was fun.  That stuff is cool to me.”

Next, is a 1991 Foxbody Mustang that has everything Logano loves in a car, except for the color.

“It’s royal blue and it’s way too blue for me, but outside of that this car is amazing,” he said.  “It’s totally re-done.  It’s got a big old supercharger on it.  Honestly, it can give the GT a run for its money.  It’s a real car – roll cage, the whole nine yards.  It’s awesome.  Bang for the buck, that’s the best car I’ve got.”

And then he’s got his toys, like the Factory Five drift truck he helped build last year and the recently completed Mach 1, or Mach 22 as it was dubbed by Car Kings on Discovery Channel earlier this month, that have the same matte black paint scheme as his GT.

But when one project ends in Logano’s world another begins and, thanks to NASCAR on NBC reporter Rutledge Wood, it’s now sitting right in front of him.

“He’s been hounding me to buy this thing for two years.  For two years he’s been trying to sell this truck, and I finally got him down enough to where he just caved,” laughed Logano.  “So now I have this truck and it needs a lot of work, but I just think it would be cool going to a car show or something with it one day.”

What color does he plan on painting it?

Any color he wants.