RETURN TO DARLINGTON – FORD GOES FOR THE SWEEP 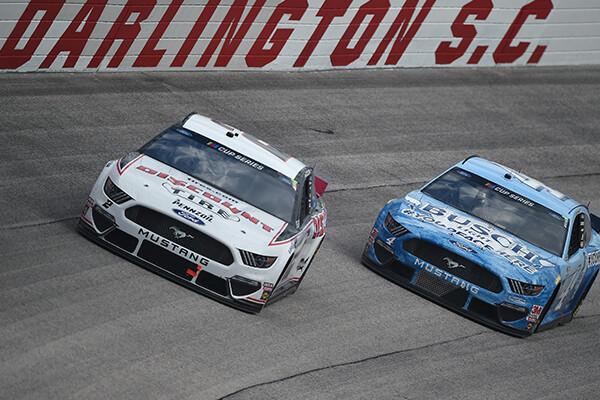 DARLINGTON, SC – May, 20, 2020 – The NASCAR Cup Series is scheduled to continue tonight with its second event at Darlington Raceway in four days after Kevin Harvick won Sunday’s The Real Heroes 400, marking the sport’s return to active competition.  Following Wednesday night’s primetime feature, the series shifts to Charlotte Motor Speedway and the annual Coca-Cola 600 on Sunday, 24th .

FORD IN THE NASCAR CUP SERIES AT DARLINGTON

FORD STARTS 2020 WITH THREE WINS IN FIVE RACES
This marks the second time in three years that Ford has won three of the first five races to start a NASCAR Cup Series season.  Joey Logano registered two wins during the western swing, taking the checkers at Las Vegas and Phoenix, while Harvick followed up at Darlington.  Ford is the only manufacturer with more than one victory this season and leads the manufacturer standings by 15 points.

FORD DRIVERS DOMINATE TOP 10 IN POINT STANDINGS
Kevin Harvick was already the points leader going into Darlington, so his victory only increased his lead, which now stands at 28.  Overall, there are seven Ford drivers in the top 10, including three each from Stewart-Haas Racing and Team Penske.  Following Harvick in the standings are: Joey Logano (3rd), Brad Keselowski (5th), Aric Almirola (7th), Ryan Blaney (8th), Matt DiBenedetto (9th) and Clint Bowyer (10th).

HARVICK JOINS SELECT GROUP
Kevin Harvick’s victory Sunday marked his 50th in Cup competition, becoming only the 14th driver to achieve that milestone.  He joins NASCAR Hall of Famers Junior Johnson and Ned Jarrett with that many wins.  Harvick will move into 12th-place on the all-time list with his next Cup victory and needs four more to catch Lee Petty for 11th and five to tie Rusty Wallace for 10th.  Of the 20 Cup races Stewart-Haas Racing has won since joining Ford in 2017, Harvick was won 15.  In addition, Harvick is the only driver on the circuit who has recorded a top 10 finish in all five events this year.

NEMECHEK RECORDS FIRST TOP 10
John Hunter Nemechek registered his first top 10 career NASCAR Cup Series finish on Sunday.  Making his eighth career start, Nemechek drove his No. 38 Scag Power Equipment Ford Mustang to a ninth-place finish after starting the event 34th.  The top 10 finish was the first for Front Row Motorsports at a speedway other than Daytona or Talladega since Chris Buescher finished fifth for the organization in the Bristol Night Race on Aug. 21, 2016.