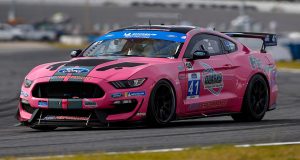 DAYTONA BEACH, FL. (Jan. 22, 2022) – A quartet of NASCAR young guns will leave their stock cars at home to compete in upcoming IMSA sports car events at Daytona International Speedway to open the 2022 season.

Austin Cindric, Harrison Burton, Chase Briscoe and Hailie Deegan – all part of the Ford Performance program in NASCAR – will pair up in two Ford Mustang GT4s for the IMSA Michelin Pilot Challenge season opener, the BMW M Endurance Challenge on Jan. 28. A day later, Cindric will step into the No. 15 Proton USA Mercedes-AMG GT3 and race in the new GTD PRO class at the 60th Rolex 24 At Daytona, which tips off the IMSA WeatherTech SportsCar Championship calendar.

Cindric and Burton will share the No. 41 PF Racing Mustang for the Michelin Pilot Challenge race, with Briscoe and Deegan in the No. 42 Mustang from the same stable. The goal for all four drivers is to gain valuable road course experience prior to embarking on their NASCAR seasons – the Camping World Truck Series for Deegan and the Cup Series for other three.

Cindric, the NASCAR Xfinity Series champion in 2020 who’ll be a Cup Series rookie this year with Team Penske, is no stranger to IMSA racing. The 22-year-old has been in 16 Michelin Pilot Challenge races with two wins and has six WeatherTech Championship races under his belt.

For Burton, 21-year-old driver of the Wood Brothers Racing Ford in NASCAR and the son of former NASCAR driver and current NBC Sports race analyst Jeff Burton, it will be a new experience on Daytona’s 3.56-mile course.

“I’ve had these conversations with my friends at Ford and at the Wood Brothers and at Penske. The one thing I wanted to work on to be better was (to) be a better road racer,” Harrison Burton said. “To have an opportunity to do that right off the bat is awesome and credit to them for being committed to helping me get better. That’s really all a driver can ask for.”

The drivers have the blessings of their teams to venture out of their regular workspace to compete at Daytona.

“We want to be flexible,” said Walter Czarnecki, vice chairman, Team Penske. “We want to give them opportunities to expand their skill set.”

“That’s one thing that I’ve really buckled down and said for this 2022 year, that I just need to get as much seat time as I can, whether it’s in dirt, circle track stuff, whatever I can drive,” said Deegan, 20, who returns to David Gilliland Racing for a second trucks season in ‘22. “I just want to get in and get more experience and I feel like one thing I could improve on – I can improve on a lot of things – but I feel like one thing that really is coming up more in the NASCAR world is road course races. I feel like being able to race any type of road course is, I think, just going to better me as a driver.”

It will be a reunion for Deegan and Briscoe, who shared a Mustang for the Daytona race in 2020. Briscoe, driving for Stewart-Haas Racing in the Cup Series this season, is looking forward to the seat time and to seeing how Deegan has improved in the two years since they drove together.

“The last time we were there was the first time she’d ever ran anything on a road course,” Briscoe, 27, said. “Now to go back with her, she’s probably ran three or four truck races now (on road courses) and has run some other IMSA stuff, so it’ll be fun to see her improvement as a race car driver.

When the Michelin Pilot Challenge race is over, the racing will end for three of the drivers. Not so for Cindric, who will make his fourth start in the Rolex 24, this time co-driving the No. 15 Mercedes with Dirk Mueller and Patrick Assenheimer. Cindric has a clear goal in mind.

“I have a very strong desire to win the Rolex 24 and that’s my motivating factor to do this race,” he said. “I’ve worked really hard every offseason to try and make something happen, not to get in a five-driver lineup just to go do the race and experience it. I’ve kind of done all that.

“I’d say the Rolex is probably the most realistic race I can look at and say I would like to win that race. I think this is a great opportunity for me to do that or at least establish my capabilities to do so and, like I said, against a group of drivers that are incredibly talented, incredibly experienced all in their cars.”

GTD PRO is just that – a class based on professional drivers. Most of the cars have factory backing. In a way, Cindric says, this Rolex 24 will mirror what he will face as a NASCAR Cup Series rookie – going head-to-head with the best pro drivers.

“Being in GTD PRO, you look at the entry list and my jaw kind of dropped,” Cindric said, “so I’m excited for that challenge.”