Rheem Reunites with Harvick in 2022 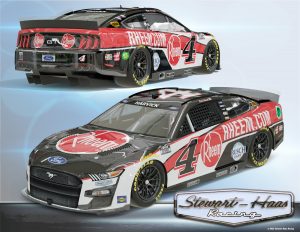 Rheem, America’s No. 1 water heating brand and major air conditioning and heating manufacturer, is commemorating its 15th anniversary in racing, and as a part of the celebration, Rheem will partner with Harvick and the No. 4 team for three NASCAR Cup Series races. Harvick will drive the No. 4 Rheem Ford Mustang March 6 at Las Vegas Motor Speedway, May 8 at Darlington (S.C.) Raceway and Sept. 11 at Kansas Speedway in Kansas City.

The pairing reunites Rheem with Harvick, a relationship that began in 2007 when Harvick won the Daytona 500 in dramatic fashion, beating NASCAR Hall of Famer Mark Martin for the victory by .02 of a second in a frantic green-white-checkered finish. It led to Rheem serving as a primary partner for Harvick’s NASCAR Xfinity Series team, Kevin Harvick Inc. (KHI), in 2008.

“Kevin Harvick helped launch Rheem Racing and through KHI, Kevin played a prominent role in Rheem realizing value in the sport and progressively moving up to the NASCAR Cup Series,” said Ed Raniszeski, executive director, Rheem motorsports. “Kevin’s long history with Rheem and his great rapport with Rheem customers makes this a very welcome homecoming. NASCAR has been an increasingly valuable platform for Rheem and we hope this reunion serves as our way of thanking racing fans for supporting Rheem and all sponsors who showcase their brands and believe in the power and future of NASCAR.”

Rheem’s debut with KHI came on May 2, 2008 at Richmond (Va.) Raceway where Harvick finished second in the Lipton Tea 250. Harvick delivered Rheem its first victory as a primary sponsor on Feb. 27, 2010 when he won the Sam’s Town 300 at Las Vegas. Rheem aligned as a primary partner with Harvick in the NASCAR Cup Series in 2011 and stayed with him through the 2013 season before Harvick joined SHR in 2014.

“It’s been 15 years since we first started working with Rheem and it’s great to be back with them,” Harvick said. “The NASCAR fan is their customer, and we’ve worked really hard to understand that relationship to ensure Rheem gets a good return on its investment. This year kind of throws it back to how it all began with Rheem being a primary sponsor on one of my racecars. I’m proud to carry their colors again in 2022.”

Harvick is the 2014 NASCAR Cup Series champion and he is also a two-time Xfinity Series champion (2001 and 2006). He has 119 points-paying victories across NASCAR’s top-three national touring series – Cup (58 wins), Xfinity (47 wins) and Camping World Truck (14 wins).

Harvick’s season kicks off with the non-points Busch Light Clash at the Coliseum Feb. 5-6 at the Los Angeles Memorial Coliseum before the official start of the 2022 campaign with the 64th annual Daytona 500 Feb. 20 at Daytona (Fla.) International Speedway.