LOOK FOR “BUILT FORD PROUD” THIS WEEKEND AT BRISTOL 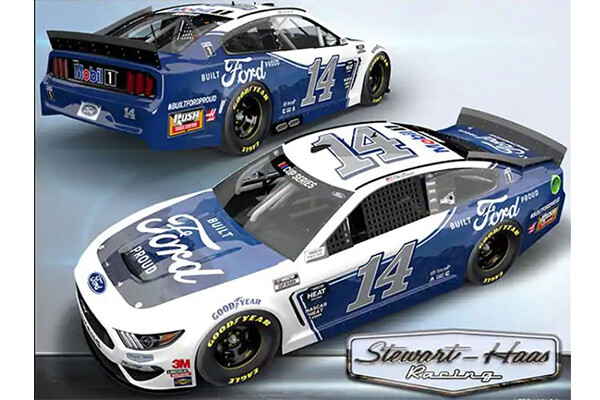 BRISTOL, TN, May 29, 2020 – There is no driver more proud to be associated with Ford Motor Company than NASCAR’s Clint Bowyer, but this weekend that feeling will take on additional meaning for both he and his No. 14 Stewart-Haas Mustang.

That’s because “Built Ford Proud” will be highlighted with decals appearing on the hood, decklid and both rear quarter panels of his Mustang during Sunday’s Food City 500 at Bristol Motor Speedway.

“I have had the privilege of driving for each of the manufacturers currently in NASCAR and each of them like to call themselves family.  When you drive for Ford and you look up you see Edsel Ford standing by your car – he’s the actual Ford family. This isn’t lip service. This is THE family,” said Bowyer, who is now in his fourth year driving with Stewart-Haas Racing.  “I think that everyone connected with Ford sees and feels this. That’s why ‘Built Ford Proud’ means so much. It’s people who really care about their work and take pride in what they do, whether that is building vehicles or helping out their fellow Americans.”

The race, which will be televised live on FS1 at 3:30 p.m. Eastern time, is the ninth of the season and fifth since NASCAR returned to action on May 17.

“We’re honored that Stewart-Haas Racing and Clint Bowyer will run a ‘Built Ford Proud’ paint scheme in Sunday’s NASCAR Cup race at Bristol,” said Mark LaNeve, Ford vice president, U.S. marketing, sales and service.  “Ford has always been a company that has risen up to help Americans in time of need, and we are very proud of the efforts of our employees who have stepped up to create PPE, ventilators and respirators for medical and first responders across this country.

“Clint and all the Ford Performance drivers have personally helped reach out to their fan bases with messages on what they can do to stay safe during this time,” continued LaNeve.  “We’re thankful they have joined us in this effort to help America.”

Since turning its attention to helping front line workers, Ford has developed new powered air-purifying respirators approved by the U.S. Centers for Disease Control and Prevention’s National Institute for Occupational Safety and Health. Ford has produced more than 400,000 reusable surgical gowns manufactured from material used to make airbags and other durable fabrics, and shipped them around the U.S. In addition, the company makes more than 1.5 million face shields a week and has shipped more than 20 million shields to all 50 states plus Puerto Rico and Guam.

The company also just announced it finalized an agreement with the U.S. Department of Defense to donate 200,000 face shields to military bases across the U.S. and abroad.

On the track, Ford leads all manufacturers in Cup Series wins this season and has 37 all-time victories at Bristol, which is the self-proclaimed ‘World’s Fastest Half-Mile’ with drivers regularly turning laps in 15 seconds or less.

“You would have to really sell hard for me not to believe that short-track racing is our best product. It just is, and the reason I say that is because it’s so much fun, so demanding inside the car. The workload is through the roof for the driver and the excitement is there for the fans,” said Bowyer, who will be making his 29th career Bristol Cup start.  “You’re really wheeling that thing, trying to keep the grip under your tires, forward bite.  Trying to keep the thing turning.  Fighting the balance of the cars.  Fighting your crew chief all race long because you’re whining in the car, and he is tired of hearing you whine.  But all those things come together to win that race and be successful.”

Bowyer has been running competitively since the sport’s return to action, becoming the first driver this season to win the first two stages of an event when he did that in the second Darlington event last week.  He led a race-high 71 laps before hitting the wall with 34 laps remaining and finishing 22nd.

“The way we are running I think we can pounce on one and get one here,” said Bowyer.  “And trust me, there’s not a team that will party as much as the old 14 car.”