CHASE BRISCOE, No. 98 Highpoint.com Ford Mustang –  Finished 5th
“That one is going to sting for awhile for sure. I feel like we were making more moves than anybody and I thought I was going to have a really good shot there at the end. I don’t know what was up with the 19, he couldn’t give me any help on the bottom. It was just one of those where you wish you would have picked the top. We went on the bottom because at the time it felt like the right decision. For our first race with Highpoint.com to almost put them in victory lane here at Daytona would have been pretty special. We will go on to Las Vegas next week and I feel like we will have a good car next week. This is a good way to start the season. You can bury yourself in points here, so for us to come out with a fourth place finish and a clean race car to go to Talladega goes a long way.”

WHAT ABOUT THAT INCIDENT BEFORE THE LAST ONE WHERE EVERYONE GOTSTACKED UP BEHIND YOU?
“I had just taken the lead and I saw them wrecking in my rearview mirror. I don’t really know what happened. I wish that caution didn’t come out though. I had taken control of the lead and feel like I could have blocked my way to the win. It just wasn’t in the cards today. But we will go to Las Vegas next week where I feel like we are going to be strong and hopefully get this Ford Mustang in victory lane.”

AUSTIN CINDRIC, No. 22 MoneyLion Ford Mustang – Finished 25th
“I was just watching the replay there.  It looks like it was in a tough spot or he got compressed pretty hard, but it was definitely the push that I gave him that sent him around, but I thought I pushed him in the right spot.  It was obviously the time in the race to push, so it’s unfortunate.  I wish our MoneyLion Ford Mustang would have been there to see the end of the race.  We obviously ran up front all day, but it’s too bad to tear up some cars, but that’s what you get here at Daytona.”

WHAT HAPPENED?
“Everyone is trying to make moves happen.  It’s Daytona.  Everyone is in a pack.  Everyone is pushing hard.  The 98 jumped up in front of the pack.  The 9 car jumped in front of the top lane, so it really compressed us.  I thought I gave the 8 the right
push at the right spot in the bumper, so I don’t really know why he got loose there.  Maybe he was trying to move, but overall it was unfortunate.  We had a fast MoneyLion Ford Mustang.  We ran up front all day and just could never get me and Chase synced up to where we could help each other.  You were usually just fighting teammates, so that’s what was difficult about today, but we’re going to Vegas and
start our season.”

WHAT WAS THE PLAN IF THE RACE STAYED GREEN?
“The first goal is to have a Ford win the race.  That’s the big deal and obviously we had the two of us and the 19 was probably the wild car, whether he was gonna go with us or the JRM guys, but the game changed pretty quickly there.  I wasn’t expecting it to go all green.  It never does in these races, so it’s just unfortunate we weren’t able to make the top lane work there and ended our day.” 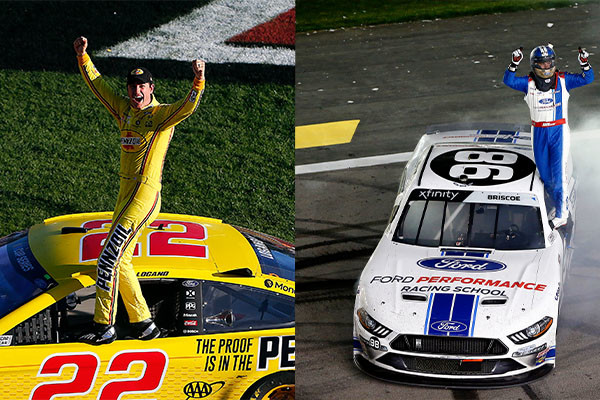