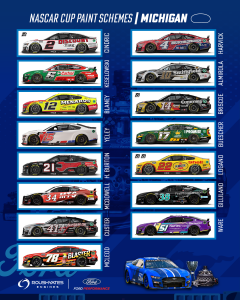 HARVICK WINS AT MICHIGAN AND GIVES FORD EIGHT IN A ROW

“For sure there is a lot of extra attention when we come here from the executives in our company, having all the employees here so we’ve spent a lot of time with the teams this week leading up to this weekend to let them know how important it is and to ask our Ford teams to work together, whether it’s the drivers or the crew chiefs, but Doug Yates has also been working really hard in the engine shop. This is definitely a horsepower track and he brought a little extra this weekend and it definitely paid off,” commented Mark Rushbrook, Global Director of Ford Performance.

“Congratulations to Ford Performance, Gene, Tony, Rodney, Kevin, and everyone at Stewart-Haas Racing for the strong finish to make it 8 wins in a row at Michigan,” said Doug Yates, President and CEO of Roush Yates Engines. “We have always strived to finish strong at Michigan and this year was no exception. We are thankful for the continued leadership and commitment from Ford Motor Company and honored to power these Mustangs.”

“I’m just really proud of everybody on our Busch Light Apple Ford Mustang. They’ve been digging all year long trying to make these Mustangs run faster. Our guys have done a good job in trying to take what we have, maximize it and do the things that we need to do. I’m just really proud of everybody at Stewart-Haas Racing. Everybody who doubted us doesn’t know us,” commented Harvick.

After a brief rain delay, Ford Performance teammates Joey Logano and Austin Cindric from Team Penske started the FireKeepers Casino 400 from P4 and P5. There were seven caution periods for a total of 36 laps and twenty-two of the 37 drivers finished on the lead lap. A nine-car pileup on lap 25 damaged or eliminated several of the leading cars. The 4 leaders underwent a huge shakeup in the final stage of the race when 2 of the front-leading cars made contact and another received a penalty on pit road. Harvick took the lead on the race’s final restart on Lap 163 and did not relinquish it, finishing the race 4-seconds in front of second place. With 3 regular season races remaining, Harvick adds to the list of 15 different drivers in the playoffs.

NASCAR Cup returns next week with the Federated Auto Parts 400 at Richmond Raceway while the Xfinity Series takes a one week break and returns to action on August 20th at Watkins Glen. 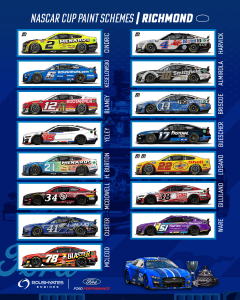 “Congratulations to Gene, Tony, Rodney, Kevin, and everyone at Stewart-Haas Racing on the win at Richmond,” said Doug Yates, President and CEO of Roush Yates Engines. “Kevin and Rodney carried the momentum from last week’s win at Michigan and executed their plan throughout this race for the win!”

“The cars have been running good week in and week out, and you see that we have a lot better understanding of what’s going on with how we adjusted on the car after the first run and were able to get our car handling a lot better. I think as it got dark, the racetrack really came to our Mobil 1 Ford Mustang. Just got to thank Mobil, Busch Light, GearWrench, Hunt Brothers, Rheem, Ford, Xfinity, Morton Buildings, E-Z-Go, everybody who helps Stewart-Haas on this 4 car,” commented Harvick.

Sunday’s 400-lap race saw a battle between strategy and execution on long green flag runs. There were five cautions in the race for a total of 28 laps. Team Penske’s Joey Logano took charge in the middle of the race, leading a total of 222 of 400 laps and winning Stage 2. Stage 3 started with an incident involving four cars, bringing out the fourth caution of the race. Logano held off the lead early in the stage until Harvick completed the race-winning pass on Lap 334. Harvick was able to hold off a hard-charging Chris Buescher who was looking for his first win of the season along with Christopher Bell. Harvick fought through lapped traffic on the final lap of the race and crossed the finish line 0.441 seconds ahead of second place, securing his second consecutive win this season. 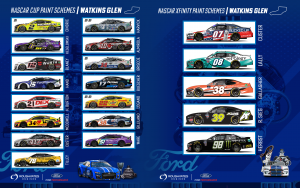 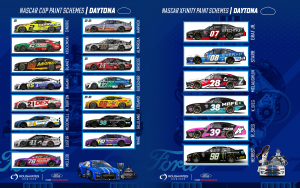