THIS WEEKEND AT PHOENIX RACEWAY

NASCAR’s three-week western swing concludes at Phoenix Raceway, where the ARCA Menards Series, NASCAR XFINITY Series and NASCAR Cup Series will be competing.  Ford has a combined 29 wins in NASCAR’s top two series and has swept the weekend five times (2000, 2001, 2005, 2010, 2018).  Here’s a look at Ford’s history at Phoenix.

FORD IN THE NASCAR CUP SERIES AT PHOENIX

FORD IN THE NASCAR XFINITY SERIES AT PHOENIX

FORD IN THE STANDINGS

Ford holds down two of the top three spots in all three of NASCAR’s top touring divisions going into this weekend.  Team Penske teammates Ryan Blaney and Joey Logano are first and second, respectively, in the NASCAR Cup Series while Chase Briscoe and Austin Cindric are second and third in the NASCAR XFINITY Series.  The NASCAR Gander RV & Outdoors Truck Series will be off for a second consecutive week, meaning Johnny Sauter (second) and Ben Rhodes (third) hold their positions until returning to action in Atlanta.

Kevin Harvick holds the record with nine career NASCAR Cup Series wins at Phoenix Raceway with his latest coming in 2018.  That victory marks the last time Ford has been in Victory Lane at the one-mile track and for Harvick it represented his third straight series win, following triumphs in Atlanta and Las Vegas.  Harvick took the lead for good with 22 laps remaining, but had to hold off Kyle Busch, Denny Hamlin and Chase Elliott in the closing laps.  The win was Harvick’s 40th as he became the first Cup driver to win three straight since Joey Logano swept the Round of 12 in the 2015 NASCAR playoffs. 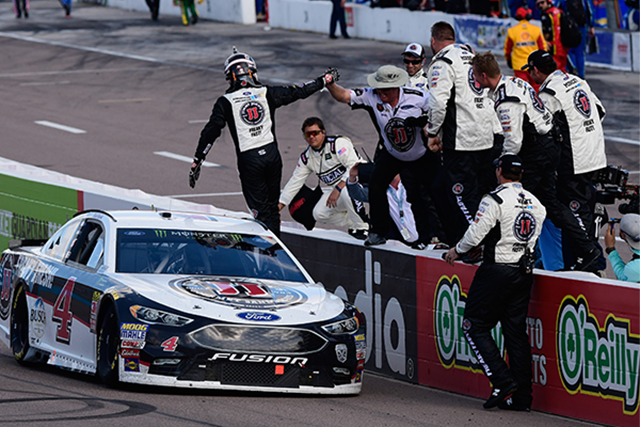 Joey Logano needed a victory at Phoenix in 2016 in order to assure he would be one of the four drivers eligible for the series championship, and he got it in dramatic fashion as he beat Kyle Busch on a green-white-checker finish.  The dramatic restart came about after an incident involving Alex Bowman, Busch and Matt Kenseth on the first overtime attempt.  Kenseth was the leader, but he got collected in an accident when Bowman tried to block Busch from passing on the inside lane going into turn one.  The resulting yellow enabled Logano to win for the third time in 2016.

When Ford went to victory lane at Phoenix in the second race of 2013, it snapped a 70-race winless drought for Carl Edwards, whose previous victory came in Las Vegas in 2011.  Edwards led 122 of 312 laps, including the final 78, to win the, but there were anxious moments, particularly at the end when a green-white-checker finish had most of the leaders wondering if they had enough gas in the tank to reach the end.  Edwards did and managed to beat Jimmie Johnson, Denny Hamlin, Brad Keselowski and Dale Earnhardt Jr. to the finish line.

Kurt Busch made Phoenix Raceway history when he drove his No. 97 Irwin/Sharpie Ford Taurus to victory in the first NCS night race held at the track on Apr. 23, 2005.  Busch dominated from the start as he led 132 of the first 133 laps, and while others like Brian Vickers and Michael Waltrip led multiple laps at different stages of the event, it was Busch who proved to be too strong down the stretch.  He passed Waltrip with 44 laps to go and was never threatened again as he won by 2.315 seconds.  Busch led 219 of the 312 laps as Phoenix hosted the first of two annual Cup dates each season for the first time.

Alan Kulwicki, driving the No. 7 Zerex Ford, won his first NASCAR Cup Series race in the debut event at Phoenix Raceway on Nov. 6, 1988.  Kulwicki, who celebrated by taking a Polish Victory Lap for which he is still remembered for today, passed leader Ricky Rudd with 16 laps to go and ended up taking the checkered flag in his 85th start by 18 seconds over runner-up Terry Labonte.  Fellow Ford drivers Davey Allison and Bill Elliott finished third and fourth, respectively.  Kulwicki, who ended up leading four times for 41 laps in taking the next-to-last event of the season, went on to win four more Cup races during his career.

Rusty Wallace had only three more chances to keep his streak of winning at least one race a season alive when he rolled into Phoenix Raceway in 1998.  He had gone to victory lane in each of the previous 12 seasons and didn’t want to see it come to an end, so that’s why what he did on Oct. 25 was so impressive.  Wallace, who started sixth, made a beeline to the front and pretty much stayed there all afternoon until rain came and halted the race after 257 laps.  The event was eventually called, marking the first rain-shortened race in the track’s NASCAR history, but there was no doubt Wallace deserved the win.  He led 196 of the 257 laps, including the final 73.  Wallace’s streak eventually reached 16 seasons before it was snapped in 2002.

All broadcast times are EST.