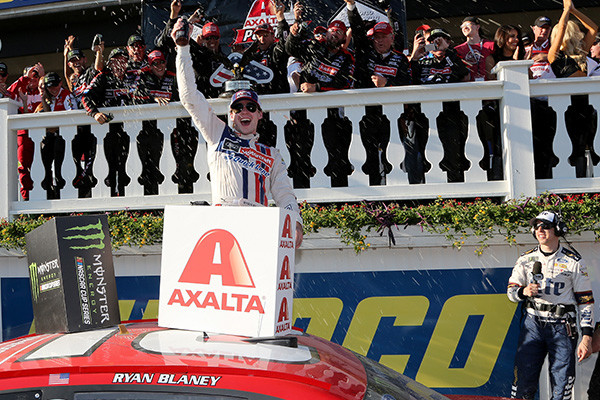 LONG POND, PA – June 25, 2020 – A doubleheader is on tap for the NASCAR Cup Series this weekend at Pocono Raceway with a 325-mile race scheduled for Saturday and a 350-mile event on Sunday.  In addition, the NASCAR RV & Gander Outdoors Truck Series (Saturday) and NASCAR XFINITY Series (Sunday) will also be in action.  Here’s a look at some of  the highlights heading into Pocono.

FORD IN THE NASCAR CUP SERIES AT POCONO

FORD IN THE NASCAR XFINITY SERIES AT POCONO

FORD IN THE GANDER OUTDOORS TRUCK SERIES AT POCONO

SEVEN AND COUNTING…
Ryan Blaney’s Cup victory yesterday at Talladega Superspeedway continued Ford’s dominance at the track and increased its win total to a manufacturer-best seven this season.  Ford, which has won 9 of the last 10 NCS races at Talladega, has now seen all three Team Penske drivers win at least once as the series heads to Pocono Raceway.  Ford also holds down the top three spots in the point standings as Kevin Harvick holds a 23-point lead over second-place Joey Logano and 25 points over Blaney in third.  Ford also extended its lead in the manufacturer standings to 32 points after 13 races this season.

BLANEY GETS FIRST CUP VICTORY
Ryan Blaney earned his first NASCAR Cup Series two years ago at Pocono Raceway, giving the Wood Brothers their 99th all-time series win.  Blaney held off Kevin Harvick over the final seven laps to win the Pocono 400 after overcoming a loose wheel only 19 laps into the event.  He found himself in position to win after the caution came out with 19 laps to go.  Kyle Busch opted to stay out while all of the other contenders behind him pitted, including Blaney who got four fresh tires and restarted fourth.  A major battle between Busch and Blaney resulted, but the newer tires proved to be too much as Blaney eventually got by with nine laps to go.  He couldn’t breathe easily, however, as Harvick started to reel him in, but could never pull alongside to challenge.

ELLIOTT SWEEPS IN 1985
Ford reached victory lane at Pocono Raceway in the NASCAR Cup Series for the first time on June 9, 1985 when Bill Elliott beat Harry Gant to win the Van Scoy Diamond Mine 500.  Elliott was able to pass Gant with 11 laps remaining, shortly after a restart, to claim Ford’s first win at the facility.  Elliott, who also started on the pole, was helped by four cautions over the final 25 laps and won for the sixth time as he led 32 of the 200 circuits.  It marked the front end of what would eventually be a season sweep for Elliott at Pocono as he won a few weeks later on July 21.

KULWICKI’S FINAL WIN
Nobody knew it at the time, but when Alan Kulwicki won the Champion Spark Plug 500 on June 14, 1992 it marked the final victory of his career.  Kulwicki, who was voted into the NASCAR Hall of Fame last week, passed Bill Elliott with 11 laps remaining to cap a day that saw 15 cars drop out before the checkered flag flew, including 11 engine failures.  In a precursor to what happened a few months later at Atlanta Motor Speedway, Kulwicki and Elliott battled down the stretch as they exchanged the lead multiple times over the final 25 laps.  Kulwicki passed Elliott for the top spot on lap 181, but traffic slowed him down to the point that five laps later the two swapped positions.  Mark Martin made it a three-way battle, but Kulwicki ultimately prevailed as he got by both drivers on lap 190 and never looked back.  Kulwicki, who won five series races overall, went on to win the championship later that year over fellow Ford drivers Elliott and Davey Allison.

WALLACE HOT STREAK
Rusty Wallace was in his first season with Ford after car owner Roger Penske decided to switch from Pontiac for the 1994 NASCAR Cup Series season.  That decision paid immediate dividends as Wallace went on to win eight times that year, including the UAW-GM Teamwork 500 at Pocono on June 12.  The victory, his second straight in a streak that eventually grew to three with another triumph at Michigan a few days later, was a dramatic one as he passed Dale Earnhardt on the final lap.   The two waged a major battle as Earnhardt grabbed the lead with five laps to go, only to see Wallace fight back after the white flag flew to win by 0.28 seconds.

BIFFLE SNAPS DROUGHT
When Greg Biffle won the Sunoco Red Cross Pennsylvania 500 at Pocono on Aug. 1, 2010 it snapped a 65-race winless drought and gave Ford its first win of the season.  Biffle found himself next to Sam Hornish Jr. on the front row of a restart with 20 laps to go and after he was able to gain the lead through the tunnel turn, he never looked back and ended up beating Tony Stewart to the finish line by more than three seconds.  The win was the first of two for Biffle that season as he also took the checkered flag at Kansas two months later.